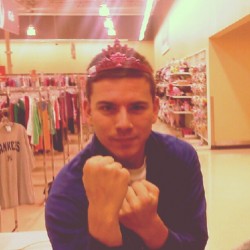 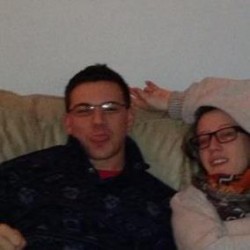 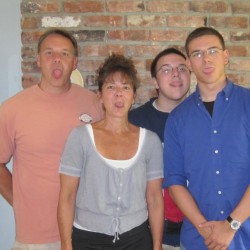 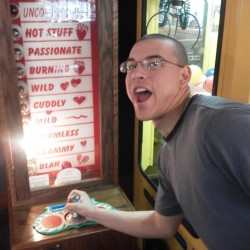 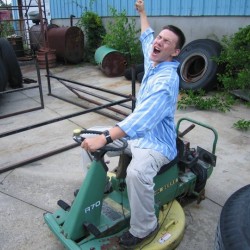 This photograph is locked, you can request access to this profiles locked photographs below.

Welcome to my profile. It is to my life and what I have to offer you as a mini-series is to a book. That makes this poorly directed, poorly cast, and loosely based on how the story actually went. Well, let's begin, shall we?

The man you see in these pictures is a very happy person. He has a career, a car, and plenty of good friends. He enjoys drinking water, breathing air, and walking on the ground. No, stamping on the ground. He dances. Dances? No, he can't dance for the life of him. But he flails to a beat well enough.

He's important in this world, but nobody knows who he is. He is to excitement and a good time what milk is to a baby. Let's say you're at a party, but he's not there. Everybody is serious, and downtrodden. They're looking at each other, at things, at you with hostility. Everything is boring and nobody is happy. But then let's say this gentleman arrives. A moment before he enters, everything becomes deafeningly silent, the kind of silence that makes your head feel like it's in a vice. Then he comes in. PWOOSH! He pushes the door open, and struts in with something of a pimp-walk. Suddenly, there are people everywhere, talking and dancing. Run DMC is playing, not his first choice but it'll do. Confetti and balloons fall from the ceiling. Someone is passing around corn chips and Fanta; where were these things before? No party is good without him.

Okay, so we know hes a good time and fun to be around. That doesn't tell much about what he brings to the table for a relationship, though, right?

Fair enough. He's not just smart, he's intelligent. No, wise. They key difference here is the application of it; to be smart all you have to do is look the part and have people accept that you know something, whether you actually do or not. Intelligence is the application of knowledge in a way that serves a purpose. Wisdom is used for good, not evil. Although, he can be a bit vindictive at times, but never in more than a sarcastic way. Below his tough, manly exterior, lies a perfect gentleman; it's been made painfully clear in his past, though, that women cheat on men like this, so he's slow to open up. Ah, well, maybe the next girl (and hopefully someone filling the position for a long time) will reciprocate his kindness better. He pulls out chairs, holds doors, always finds something to compliment, even if you've come home from a day at work shoveling sh*tand look like you got dragged through it. He'll buy you flowers and candies on a bad day, without you even telling him it was a bad day, and cook you dinner while you relax. He'll even do the dishes afterward! But what's most important about this man is that, no matter how bad things get, no matter how tough life tries to make things on the both of you, he'll always push through hell for nothing more than to see you smile one more time. Oh, and he loves hugs and cuddling; if he were Superman, cuddles would be his kryptonite.

Okay, we've established that he works hard to make relationships worthwhile. What was that bit about a tough, manly exterior?

Ah. Well, for starters, he does his best to stay in shape. While he's no Atlas, he runs at least five miles a day and goes to the gym twice, on top of group training for a Tough Mudder. He has lots of lean meat on him. He secretly wishes he could run away to Canada and become a lumberjack, and cut trees down all day long while riding a bear as his primary mode of transportation. He loves dogs, but isn't totally opposed to cats either. When he's driving somewhere, he listens to something like Train or Sinatra and rocks the f*ck out. He can be all business at times, but when it's not important, he's going to ignore it and enjoy himself. He's very sarcastic and lives to see people laugh and smile. He hates stepping on LEGO bricks, but has an unhealthy addiction to NERF guns. He uses baby soap and baby shampoo, but he balances this out by shaving with a straight razor, which is because it's a relaxing morning ritual of hot water and a soft brush massaging his skin while he listens to Sinatra or Dean Martin, not because he saw it in a movie (he gets asked this a lot). He used to do stand up comedy, but now he's something more of a paramedic. Oh, and he write short stories.

Well, tell me more! There's no way there's a straight man who prefers his women clothed and happy rather than naked and subservient to his will.

That's what you'd think. Why don't you message him and find out for yourself?

Someone who appreciates me. That's all. You don't need to meet me naked at the door, just have a smile and a hug waiting. Also, cuddles. Because cuddling is wonderful.